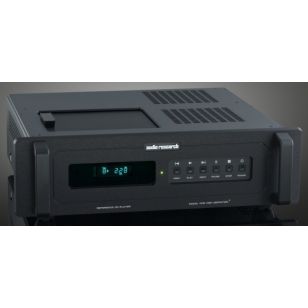 Lector CD de referencia. Dac interno con salida a valvulas, triodos. Salidas RCA/XLR. Mando a distancia. Excelente calidad de sonido. REFERENCE CD8 Compact Disc Player We are proud to introduce a model that may be the most musical and musically accurate single-chassis compact disc player, the Reference CD8. It replaces a product that was still garnering five-star reviews three years after its introduction, the esteemed Reference CD7. With the advent of the CD5 and DAC7 in 2008, we knew that the DAC used in our Reference player needed a newer, higher-resolution version. (The new 24-bit, 192-kHz chipset is not retrofittable to the CD7.) And, our engineers found a way to physically incorporate the same power-supply regulation used in the Reference 3, using a single 6550C to replace two 6H30 triodes, giving better performance and longer tube life. Other enhancements include our newest output coupling capacitors and special damping tweaks. The playback mechanism continues to be the unsurpassed Philips PRO2R — still the best dedicated CD mechanism available. The REFCD8 also features a new dimmable display, allowing five levels of illumination or completely off. A small LED indicator remains lit when the player is on, as a reminder to prevent the player from being left on inadvertently. In size, input and output configuration, —and in all other operational functions, the REFCD8 is identical to the REFCD7. But there the similarities end. Sonically, the REFCD8 stands in a class all its own. While retaining the lush, full embodiment of the CD7 sound, the CD8 adds new dimensions of transparency. It immediately shows greater transient speed top-to-bottom, purer resolution of low-level detail and expanded dynamic contrasts, with more bass slam, definition and extension. The soundstage is larger and more holographic because of the heightened ability of the REFCD8 to embody and locate instruments and voices. Rhythmically, the REFCD8 also picks up the pace compared to the CD7, with improved timing cues and better rhythmic interplay. You will find other sonic dimensions to marvel as you spend time with this enticing player. Quite simply, the REFCD8 will have you rearranging your compact disc collection all over again as you rediscover and reprioritize old and new favorites. It really is the most mesmerizing, musically accurate CD player we have ever experienced — and what better way to bring enhanced value to a growing, and costly, CD collection! Lector CD de referencia. Dac interno con salida a valvulas, triodos. Salidas RCA/XLR. Mando a distancia. Excelente calidad de sonido.