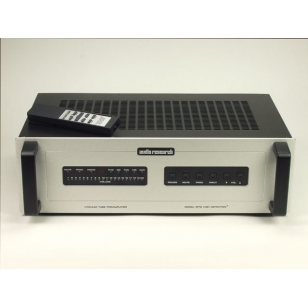 SP16 / 16L Stereo Preamplifier The analog renaissance continues! Ever since the SP9MKII was discontinued in 1996, the demand for a full-function Audio Research preamplifier with an integral phono stage - and an affordable price - has grown ever louder. Well, we have been listening, and are very excited to introduce the SP16. The SP16 will also be available as a line-stage. A lot of thought and preparation went into this product because we wanted it to provide so much, including classic tube architectures for both line and phono sections, flexibility, modern conveniences, and to redefine the level of performance in its price range. The SP16 is completely single-ended with five sets of inputs (labeled Phono, CD, Tuner, Video and Aux) plus a Processor pass-through. There are two sets of main outputs for flexibility, plus a Tape out. The SP16 has a 12-volt trigger to turn on power amplifiers or other equipment, and full remote control of all functions including power, input selection, stereo/mono, volume, and muting. The power cord is our standard removable IEC. The most important control functions of the SP16, including Power, Mute, Processor, Input select, and Volume Up/Down, are accessible on the right side of the front panel via six soft-touch buttons, just like the control buttons on the CD3. On the left side of the front panel (mirroring the control function cutout on the right) is an LED display indicating Input, Processor, Mono, and Mute, with a horizontal row of LEDs underneath numbered 1-20 (lit one at a time) for volume. In its other physical aspects we have made several changes from the norm while still maintaining the strong Audio Research look. The front panel is 17.75 inches wide and is virtually flush with the chassis sides. Look inside, and you will see the same beautiful construction quality found in its more costly siblings: the same expensive board material, the same extra-thick copper circuit traces, even the same point-to-point wiring and hand-soldering of parts. Machined RCA connectors, not cheap imitators. The SP16 is pure Audio Research, pure Class-A, with all-tube gain in both line and phono stages utilizing three select 12AX7 tubes in each circuit (six total). We are enamoured of these particular 12AX7s -- which are new production and have only become available in the last few months - not only because of their sonics, but also because they allow the circuit topology to remain simple while providing high-gain. Circuit highlights include regulated power supplies with a total of eight high and low-voltage regulators, high-energy storage plate supply, our patented DEC filter cap decoupling, high performance input-selection relays allowing short audio paths, and 70-step digitally-controlled analog-switch volume control with precision tracking. Dual low-impedance cathode-follower main outputs allow you to easily drive two power amplifiers simultaneously. Gain for the line inputs is 12dB. Total gain from the phono input to the main outputs is 54dB, suitable for moving-magnet and high-output moving coil cartridges. If you were curious about our rationale for labeling this new model the SP16, it is simple: this is the first new full-function preamplifier, with an integral phono stage, introduced since the SP14 and SP15. Sonically, the SP16 is pure fun as it easily unravels fine musical lines, bouncing along with surprising micro and macro-dynamic swings. The soundstage is big, airy and dimensional. Vocals have real body, making Ella, Frank or Diana sound like they're singing just for you. The SP16 is so good that it can be partnered with a vintage D100 or a new VT200MKII and sound glorious either way. And, it will make the sound come alive when it's used with an A/V processor. The SP16 without the phono stage is designated the SP16L. The front panels of both versions are identical, except that on the "L" version the Phono LED will not light when selected. On the rear panel there are no RCA input jacks where the phono inputs would be, there is no ground post, and the model is listed as SP16L. Internally the phono stage is on the main board along with the line amp section, but will not be "stuffed" with components, tube sockets, etc. on the line-only version. Yes, the phono section can be added at a later date at the Audio Research factory. The price for this modification is yet to be determined. Control Functions: Power On/Off, Mute, Processor, Input, Volume. These functions plus Mono/Stereo also addressable with handheld remote. Inputs: SE Phono, CD, Toner, Video, Aux, Processor Outputs: SE Record, Main 1, Main 2 DIMENSIONS: 17.75" (45 cm) W x 5.2" (13.2 cm) H x 10.0"(25.4 cm) D. Rear connectors extend 0.6" (1.5 cm). Front handles are optional at additional cost. WEIGHT: 12.6 lbs. (5.7 kg) Net; 20 lbs. (9.1 kg) Shipping.